No great art to be found here, just a family outing, really.  My bro was in town, we went to Bishop Castle in southern Colorado which this guy has been building by hand for the last 40 years or so.  I used about half of my roll of AGFA Precisa CT 100 on this outing.  Honestly if I did it again I’d have to get a wider lens or use a different camera.  Most of the shots are using a 35mm lens and it just isn’t wide enough to get everything in that I want to, but that’s life.  I don’t think the pictures are too amazing, but this is the kind of stuff that I’ve been doing for the last 5 years now, just documenting things and life the way people used to do it: on film. 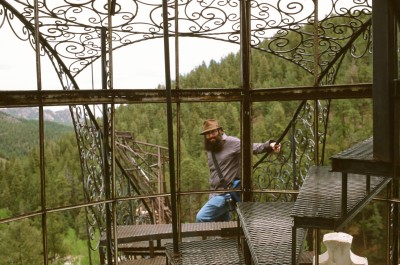 The last picture of my beard. Sigh… For the record I didn’t take this one.

Again, I think AGFA Precisa is probably rebranded Fuji Provia 100F.  I think it looks great myself, and it cost me half of what a “real” roll would have.  I hope they make more, because right now people seem to be selling it for way too much.  Don’t buy it unless you can get it for cheap.