…but I’m not accepting defeat either.

I’ve been watching all the news stories that Pro8mm has been posting and rejoicing about.  Honestly, it looks like film users had a lucky scrape here, because I certainly haven’t been worrying that Kodak was in danger of closing down film production.  And the good news is, they’re not.  However, there are a few things I got from reading this article:

1. The film studios didn’t give a damn about partnering with Kodak, and are only buying film under pressure from some certain filmmakers.  Not surprising, but still disappointing.

2. I didn’t know the Rochester plant was in danger of closing.  I also didn’t know that film made up so little of Kodak’s business these days.  Good thing for them, I guess…

3. “Over the next few years” is a very short amount of time.  What will happen after that?  It seems that the studios agreeing to buy a certain amount of film stock is a stop-gap measure that has an expiration date.

4. Now the positive side: since Kodak’s business has pretty much leveled out now, they have the best opportunity right now to find stability and a working business model for their chemical imaging.

5. Sale of chemical still photography products hit bottom a year or two back, and is steadily on the rise.

At the end of the day, all those people who over the years told me that film was dead come off sounding like this:

Digital has done its damnedest to kill film, but it still hasn’t succeeded, despite its claims.  Great artists don’t compromise, and as long as there are those that are willing to stand up, speak out, and fight the good fight, the choice for chemical imaging will remain a viable one.  Notice what I’m saying the goal of film users is: choice.  Will the masses ever cast away their digital cameras and way of life to usher a renaissance of the all-film age?  No.  Film users’ goal has not been to stomp out every other way of making images (moving or otherwise), but merely to ensure the survival of a unique way of working, and the results it produces.  To do otherwise would be like doing away with a primary color, like yellow.  Sure, everyone’s images would become much more patriotic overnight, yet we would all be living in a world with much less depth, less interesting.  Half our color palette would be gone!

Kodak won’t be making film forever.  All their equipment is set up to run high-volume production, and it isn’t cost-effective for them to produce film on a too-low-volume.  At some point, they won’t be able to afford the lack of demand and will close down the plant, but they’re not the final film manufacturer.  Orwo still makes black & white motion picture film, Ferrania is reopening soon and will make color reversal (and negative).  On the still side, there’s again Ferrania, Ilford, AGFA/Rollei, Foma, and several others that are emerging from obscurity (and Fuji, for the time being).  Film isn’t going to die any time soon.  At the very end of that, there will be plenty of large-format cameras around, and with processes like wet plate collodion one isn’t dependent on a company manufacturing film; all it takes is a supply of glass windowpanes and the knowledge to mix chemicals.  It’s been around for 150 years and will last longer than anything else.

One more thing to reflect on, and a picture (again, not mine): 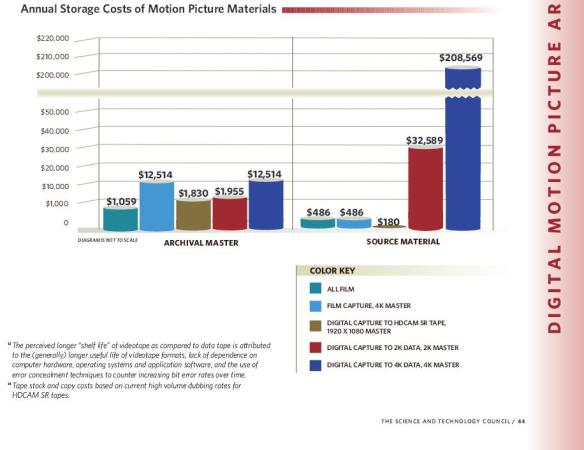 This is from the official report on the cost of archiving digital information, specifically movies, researched by the AMPAS Science and Technology Council.  You can read the full report here if you’re interested (also available here).  How much work will be lost, because the cost of maintaining it will prove too high, or ultimately unreliable?  Films like Citizen Kane, The Great Dictator, Metropolis, A Trip to the Moon, and countless others can be bought and viewed today by anyone, because the film elements have stood the test of time.  In a hundred years, will we be able to say that about Russian Ark, the films of Lars von Trier and Steven Soderbergh, or all of the digitally-captured films that will be made this century?  Knowing digital’s archival limitations, will films increasingly become cheap throw-away products, a downward creative spiral?

I don’t know why so many people think true artists would compromise so fully as to abandon the best medium for image capture that’s ever existed.  I’m extremely grateful to the artists in the movie industry that are so powerful that people will actually listen to them. To all the people that speak up on behalf of film, thank you! It’s the most important creative choice available.