Was this taken with my Sigma zoom lens?  I can’t remember exactly, it was 3 1/2 years ago now, but back in those days I think the only things I carried with me were the SMC Pentax-A 70-210mm and the Sigma 35-135mm zooms (they were also practically the only ones I owned).  It’s hard to favor the look of this lens over a real Pentax-made one and I doubt I’d use it these days but I didn’t let my equipment (or lack of it?) prevent me from taking a chance in the early days; I hope I can keep that spirit alive.  The objective is to make good images, and the important thing I try to remember is that one doesn’t need the fanciest equipment, or even hardly any equipment at all.  It’s something I really need to try to learn myself, to be happy with what I already have. 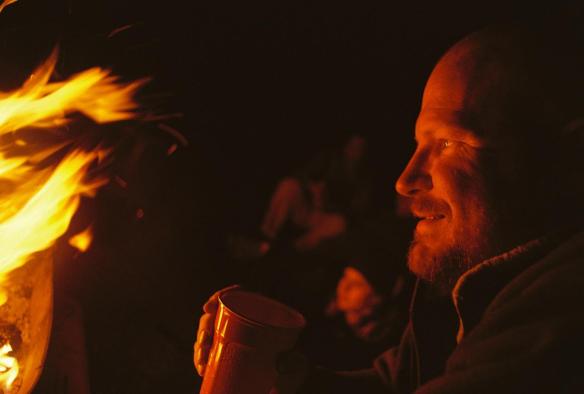 Well actually, I had a dream, last night.  In the dream, Kodak announced a new line of Vision 4 films for both motion picture and still photography, and instead of having a tungsten-balanced line, it was made for some new type of lightbulb that had suddenly become popular (cobalt filament?  I can’t quite remember what it was, or if that’s even possible).  They also had a new color scheme, lots more green in it, sort of a cross between classic Kodak and Fuji colors…I wonder if it’s a portent of the future…

I’ve been looking to get a rangefinder camera for a while now, but so far I just don’t have the best luck with the ones I’ve come across.  I suppose I shouldn’t complain too much about a camera I bought at the old thrift store for $6.00.  Not too much.  The first thing I’d say though, is that after shooting a roll through it, I noticed that the lens is absolutely lousy with fungus; I don’t think I would have bothered if I’d seen that earlier, even for that price, and so I still don’t know how a clean example would look.  However, what I will say is this: it certainly feels and handles very nicely.  The film advance is smooth and easy, as is the focusing.  The aperture diaphragm has at least a dozen blades as well and was sort of the deciding factor for me (besides the price), not knowing much about Petri the camera company.  There’s no light meter, but I felt confident enough to shoot Sunny-16 with a roll of Portra 400, and do a bit of street photography at the weekly farmers’ markets back in the Summer.

I can’t say that there are too many pictures I took that I am fond of here, that’s why I posted so few of them, and I wonder if these will do me more good than harm.  Perhaps I just need to get the hand of using something other than an SLR, but it didn’t feel wrong when I was shooting, it’s just that most of the results seem forced.

Another annoying thing about this camera is its self timer, which is a lever on the lens itself and protrudes quite far, making it easy to set accidentally: there doesn’t seem to be a way to cancel it, resulting in a few wonderful masterpieces like these ones: 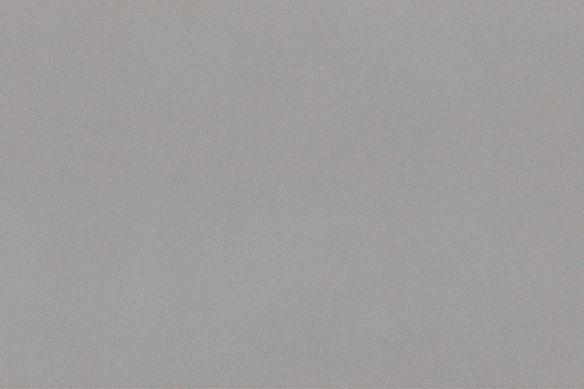 I’ve considered bending this annoying lever so it stops catching on things, but honestly I don’t think it’s worth the effort.

I also contracted a rare disease from this camera in which the user starts inadvertently to take pictures while pulling the camera out of his bag; unfortunately it took me a while to recover and it was several rolls after this one that the symptoms finally disappeared.  I pray to never suffer a relapse, but unfortunately I will never get those wasted frames back…

With the right film, the lack of a light meter didn’t turn out to be a liability for me (actually I picked up a spotmeter at a garage sale while shooting this roll of Portra) so if I come across another rangefinder camera that doesn’t have one like a Canon P or something, I’m not going to immediately discount it.  This was also my first roll ever of Portra 400 and while I still prefer the grainier consumer films, I have the feeling Portra’s colors would look real nice shot through my Spotmatic and will have to try it again someday.

I’ve always been more of an album listener myself, and when posting it mostly seems to be a roll or two at a time.  However, I’ve decided to post more, so I’m going to start digging into my back catalog.  Time to release singles as well.

It’s from a Pentax A-3000 thrift-store special with a 50mm lens that only stops down halfway.

The more I shoot indoors the more I feel the need for a 1.4 normal lens.  So when looking around the auction sites for either a Mamiya/Sekor or SMC Takumar, of course I stumbled on this beauty instead: 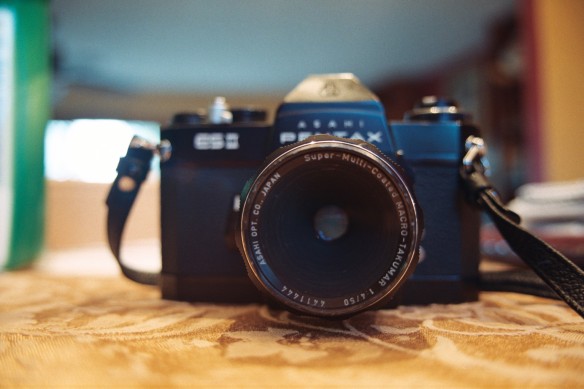 (I’ve decided I don’t want to do digital shots of my cameras, so I’m reserving a frame or two per roll for the purpose of posting pics)

A Pentax ESII with an S-M-C 50mm f/4 macro lens?  Yes, please.  The starting bid was pretty fair, assuming you wanted both items and not just one, but I can’t imagine many people wanting to pay more.  I don’t always agree with everything Ken Rockwell says, but when it comes to bidding on Ebay, we’re practically on the same paragraph of the same page, though my SOP is modified somewhat.  If it’s something that I’d like but either I can’t be there for the end of the auction or am a little bit on the fence still, I put in a low bid, say exactly what the starting price is.  If someone else wants it, then it wasn’t meant to be and my bid won’t drive up the price by more than $0.50, and if no one else bids, then it must have been fated to be mine.

Well, the camera wasn’t quite as functional as the descriptions led me to believe.  It’s taken a couple bad hits it appears: the lens has a few dents on the filter ring (to be fair, I saw these from the photos and it shouldn’t be too hard to fix though I haven’t tried yet), the mirror stuck in the Up position every time you advance film, the automatic functions didn’t work, and the film door didn’t close properly.  The film door wasn’t too big of a problem, it took some hammering and seems better now; I suppose shooting a roll through it will tell for sure.  The mirror and auto exposure problems though, I wasn’t too happy about those and would need to get them fixed.

I certainly wanted both the lens and the body, and hate the idea of paying return shipping, so I wrangled a deal with the seller getting half my money back, figuring I’d be putting that money toward a full CLA from my local camera store (God knows how much it would cost though, with the mirror and AE problems; they couldn’t give me an estimate over the phone).  Still, I hate spending money I don’t have to, so I started looking around the internet for a more cost-effective alternative and was able to find the information I needed.  I’m hardly a techie, not very electronics-savvy, it’s always frightened me to do anything more than very basic repairs; my crowning achievement was being able to change out the pinch roller on my cassette portastudio.  Compared to that, this was a breeze.  It’s really not that hard.  You can do it, I promise.

Anyone with a Spotmatic problem where the mirror sticks in the Up position, check out this helpful tutorial.  If anyone is interested, I used trumpet valve oil (Al Cass is my brand of choice) administered with a Qtip and toothpick.

The AE problem was even simpler: pushing the shutter is supposed to trigger the light meter, but it wasn’t making contact and because of this, I wasn’t getting but one shutter speed in Automatic mode.  It’s actually the same problem mentioned here, but I only found this later.  Epoxy is a very nice solution!  I just used tweezers to bend the contacts until they were back in proper alignment and wrapped the thing in electrical tape.

With that though, I now have a fully-functioning Pentax ESII to add to my ever-growing M42 collection.  It took all of half an hour to fix.

While I didn’t exactly have haunts per se while going to Ohio State, Kafe Kerouac is quite close (about 300 feet) to my old apartment, so I did occasionally go there, if only to support friends’ shows.  I was happy to be able to do it again while in Columbus. 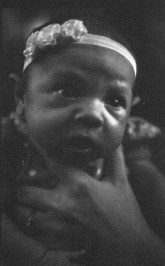 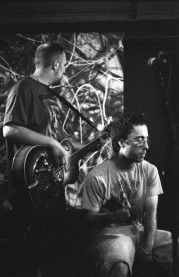 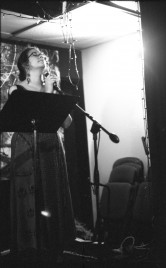 I came with 4 exposures left in a roll of Superia 800 which I promptly used up quick so I could shoot some Tri-X at 1600.  There were definitely times during the evening that I really felt the lack of a 1.4 prime and it’s something I plan on acquiring soon.  The scans came out pretty horribly I thought so I spent an entire day redoing them myself on school equipment (Dehk, I tried to take to heart what you’ve written about scanning, and definitely think a glass carrier would help with the flatness of the negatives).  One of the pictures even had a rather unfortunate speck on the emulsion side; I hope that doesn’t happen too often, but as it is, the next time I have to use these guys I’ll just process the film and have it returned to me uncut so Cameraworks can scan it.  Speaking of scanning things, after the better part of a decade Epson has announced a new line of film scanners.

Shooting people’s shows seems to have become a regular thing for me now.  I have another one I’ll put up in a week or two.  Until then, go out and buy more film.

Another Kickstarter campaign, this time from Ferrania.

Please back it by clicking here.

I already see this as a win.  It’s not even been a full day yet, and they’re already 2/5ths of the way to their goal.  People want this and it’s going to happen.  Film for another century.  Victory.