So I ended taking a bit of a sabbatical the last few months, not my original plan but I’ve been doing a lot of music stuff and not much on the photography front.  I’m here, I’m alive.  In fact, it was my intention to keep shooting black & white over the summer and start developing with my Caffenol recipe at home, but what happened is that I think I got a bit burned out taking pictures for a bit so I took a break.  I just finished my first roll of black & white since the summer started.

What I have been doing though, ever since I got the Pakon, is scanning and adjusting all my negatives from my Fall 2013 Intro to Photography class, just whenever I had some free time to get on the computer.  I’m on roll 9 of 13 right now, and along the way, I’ve noticed a few things.

First of all, I’m losing shadow detail, and I don’t know what to do about it.  Here’s an example:

flatbed scan of an optical print

FYI the print I had wasn’t my final one, I gave that one away to the subject, and this was one of the outtakes from practicing dodging and burning.  I actually burned her face in a bit in Photoshop to make it look more natural. 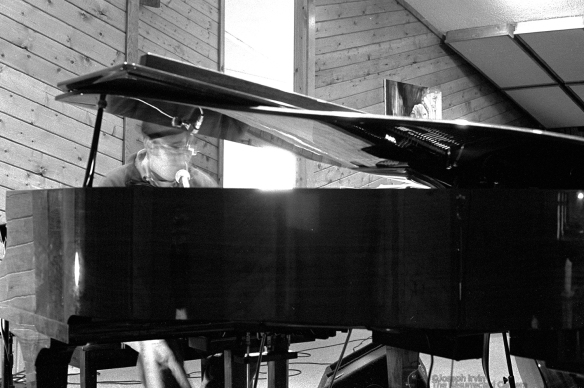 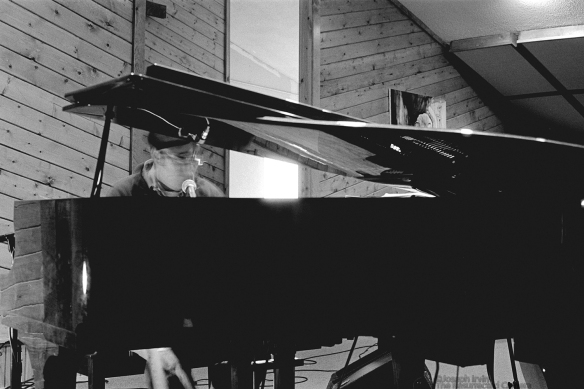 Looking at the raw Pakon scan, there’s just nothing there in the side of the piano.  The Minolta scan has its problems, mainly due to the fact that I was quite new to the process and insisted on doing all adjustments in the scanning software itself.  With the Pakon though, for the most part I’ve been taking the raw negative images captured by the scanner and doing all the work myself in Photoshop, and have been pretty happy with the results, but not necessarily wowed.  In fact, going back and comparing some of my earlier work to what I did on the Minolta, the Pakon-scanned pictures can look a little flat sometimes.  It could be that I just don’t know how to use the software that well, I’m not going to rule that out (UCCS does offer a digital photography class, I’ve stayed far away from it so far, now I wonder if that’s such a good idea).

Some of the pictures are looking a bit flat because if I push the contrast too much, I get some rather unfortunate and annoying artifacts, I don’t know really how to describe them.  On the last roll of film I completed, I had given myself the PSI-processed versions as well (I think I adjusted them to -10 contrast or so) for comparison.  PSI tends to make black & white way too contrasty and sometimes unpredictable, but I had lots of shots that I had liked looking that way on this particular roll, so I brought the PSI-processed scans along.  That’s when I learned something pretty wonderful:

The grain seems to be exaggerated in my raw scans, and gradients don’t do too well (look at the top of third of the picture–I’ve been dealing with that a lot), but PSI is doing a better job making these pictures look nice.  I hadn’t been using my earlier scans as a baseline to match what I was doing with the raw Pakon scans, which is probably why I’ve gotten some funky results without knowing.  I went through that entire roll making the raw scans look the best I could, then taking the PSI-processed pictures and making those look the best I could, and PSI won out just about every time.  And that’s with the Pakon not being able to read the DX code on Tri-X.

One thing I haven’t tried doing is seeing if TLXClientDemo will give me a different-looking file at all, I don’t know if that would make a difference at all, but one of these days I’ll research it.  The other thing is that this company is reputed to have the best modern way to convert and process negatives, and have good color profiles for all modern films that came out after Kodak stopped updating Pakon’s software.  I’d like to try out Color Perfect with raw Pakon scans, see if that could make a difference for me, but that’s in the future.  For now, I think I might be starting over with my 2013 negatives, getting the PSI-processed scans and working from those.  Man, that’s a lot of work to redo…

edit: The saga continues (with a happy ending) here.