A week ago, some of my classmates and I got together for a photoshoot, my first of this kind.  I did set up my own picture, which I’m happy enough with, but it’s still the unposed pictures that I like the best.  I also noticed that, aside from still having problems from this expired bulk roll of Tri-X, it seems my 1.4/50 Super Takumar is giving me problems with sharpness occasionally, especially the closer I get to wide open (or it’s possible depth of field is so small that I’m missing the focus).  I actually thought it was a problem with my scanner at first, and took the time to recalibrate/refocus and rescan the negatives, but it was the lens.  Either way, some of the sharpest and best-looking photographs of that session were with the 2.5/135 lens, but the 1.4/50 has a nice dreamy quality to it, great if you can nail the focus…I’ve started carrying the 1.8/55 again, for the time being. 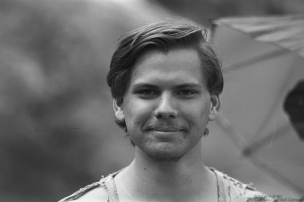 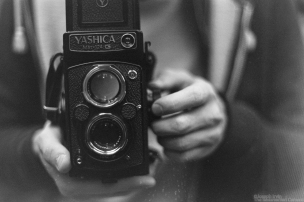 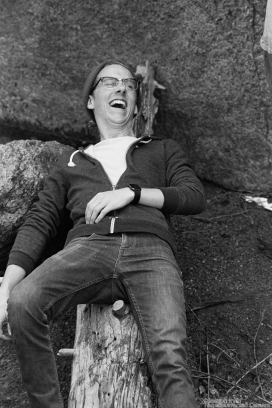 I remember nearly back to the start of buying DVDs when I started discovering all the wonderful special features they could contain, I came across an album of pictures taken by Jeff Bridges, of all people.  Evidently he’s been taking on-set behind-the-scenes pictures for every movie he’s worked on since the mid-1980s, and every now and then the DVD will include some of them as a supplemental feature, a special treat for me (and others I’m sure) because a lot of them are stunningly good, and show a better insider’s perspective than most:

He takes all his pictures with a 35mm Widelux panoramic camera, not really something I had heard of before, but just looking of the shape of the frame reminds me of that widescreen anamorphic aspect ratio, very fitting when the photographer is a famous actor.  He has his own book out, aptly titled Pictures, which chronicles over two decades of his life on movie sets.  In addition, he is in the process of an ongoing series he calls “Tragedy/Comedy” and when i first started looking at some, I thought they were composites, but I was wrong:

The first time I came across [the Wide-Lux] was in high school. We had been gathered together to take our class photo. The photographer had a Wide-Lux. He explained how it worked. Some kids figured if they ran very quickly, they could beat the panning lens and be in the picture twice. They were right. Years later, I started using this technique to take pictures of actors creating the theatrical masks of Tragedy and Comedy. The result was someone frowning and smiling at himself – all on one negative.
-Jeff Bridges 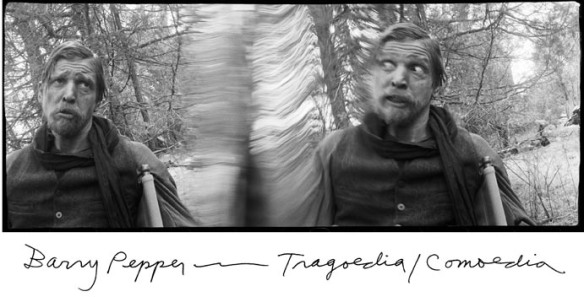