Fall 2013.  This was actually the first recording session I photographed.  We had split the class into two groups, and since I had already recorded some guys with my group, I showed up the second day with my camera, hoping to get a few good shots for my final project in the Intro class shooting portraits.  Nothing really worked for my assignment itself, but I still liked a few of the pictures I took. 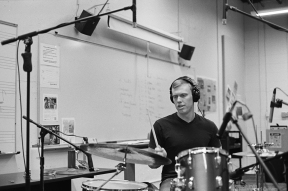 This was the first time I brought out the Canon AE-1 that my friend had given me, and put the 50mm 1.4 SSC through its paces.  I won’t say that I disliked the lens too much, and maybe I’m not attuned to the Canon look, but for the most part, I didn’t think that lens had it.  What it did have, was some pitting (or at least flaws in the coating) in the rear element, and I ended up returning it, as I didn’t think it was quite worth the price I paid.

2 thoughts on “From Sound Recording class”