Please don’t take this as an endorsement.  I’ve been waiting to post for a while, but thought it might be more relevant around election time.  Donald Trump held a rally at UCCS back in July.

We all found out about the rally two days before he was here; it happened to be my day off so I went down.  I can remember a lot of outrage almost at once, mostly individual outbursts on Facebook, but it does remind that while Americans talk a lot about valuing free speech, it’s usually only when it’s speech we agree with.  Word got out of a petition signed by 114 UCCS faculty (many of whom I know) which, as far as I can tell by reading the wording of the text, doesn’t condemn his appearance on campus as much as just declaring disapproval of Mr. Trump in general.  What that petition was supposed to accomplish besides putting on the record those professors who are likely voting for Hillary Clinton, I don’t really know.  Personally, I was excited that UCCS should gain the exposure brought by the rally and was happy to attend. 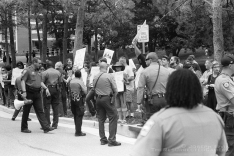 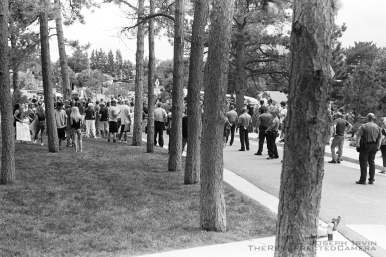 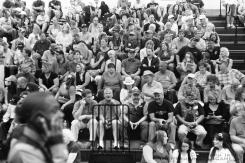 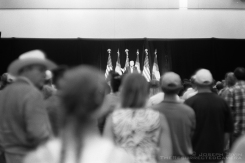 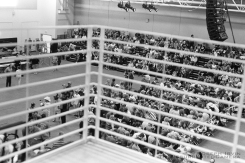 One could get a maximum of two tickets for the event, free on Mr. Trump’s website, and I saw a lot of suggestions on Facebook discussions that people sign up for tickets and then not show up.  Well, this didn’t accomplish anything at all because room was given on a first come, first serve basis; they didn’t even check tickets, but I did get junk mail from the Trump campaign for weeks after that.  I got on campus around 10:00 (Trump was scheduled to come on at 2:00), walked from a free parking spot, and got in line around 11, with the line already stretching East from the University Center, past Dwire Hall, down the hill and halfway around Centennial Hall.  It took 90min to get inside the building (great organization there) by which time I wished that I’d had some food on me–of course there would be no food served inside, but thank God there was water!

I learned later that only about 1500 people were allowed inside Gallogly Events Center (it’s where we have basketball games) and I must have been among the last few hundred let in.  Most of the bleachers were full already, I hung around on top for a minute before being told off by a security guard, and did manage to spot a friend of mine standing near the stage, so I went and hung out with him.  Trump was late by more than 45min, and I remarked at one point that it was no longer fashionable. 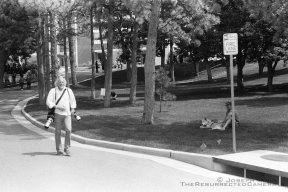 I’ve done my best to stay out of this most recent rat race, and hadn’t heard Mr. Trump speak before.  I have to say, he was quite entertaining, even if he didn’t have much to say.  I think he spent the first 20min or so cracking jokes about the DNC.  People would yell to him to talk about a particular issue, and he’d pause on that briefly before going off on some wild tangent.  He did have some strange fixation on our fire marshal doing his job, I hear he went back to that several times after I left.  I stuck around for about 45min (perhaps an hour), but my back was killing me and I was hungry.  I had heard that perhaps as many as 10,000 people had shown up looking to get in to the rally, and that the protesters had finally decided to roll out of bed and come down, so I went to take pictures outside.

I’ll admit, one of the main draws for me was the possibility of seeing some “excitement” break out among the protesters, but it didn’t happen.  Talking to a few of the photographers and newsmen outside, evidently there were many more protesters that left before I got out, but when I was there they were only 50-75 strong, talking loudly to about the same number of people on the other side of the campus road.  Nothing happened and with not a whole lot of people out there, I went to the on-campus pub and got some lunch, then played pool with a friend of mine.  Well, the day fizzled out so I then decided to go home.

I’ll admit, I feel a little bit like Les Blank on Burden of Dreams here, missing the best parts of an event by being in the wrong place and at the wrong time.  I missed more gigantic crowds outside, and also found out after the fact (from friends’ Facebook posts) that Mr. Trump walked the floor after his speech, so I missed out on getting up close and personal with my camera.  Oh well.  Here are a few links pertaining to the event: