Aka “Too Many Hats!”  I wouldn’t consider these the absolute best pictures ever, but it’s hard to be the composer, conductor, and music producer, and also try to take a few pics on the side.  This is the recording session for a new ballet film based on Oscar Wilde’s The Picture of Dorian Gray.  As a ballet, I had to compose the music and have it recorded by a certain date, without having seen any footage.  Now that it’s recorded, I’m hard at work mixing, mastering, and polishing, while my director Felicity works on the choreography.  While I’d like to say that I drew a great amount of inspiration from Wilde’s novel, reading it would have taken much time away from actually composing the music; I watched Albert Lewin’s 1945 film adaptation instead. 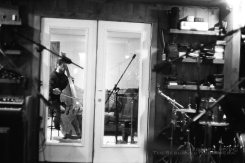 This marks the first time I have used the Canon 7 since Fall of last year, and I’m out of practice: there are one or two rather glaring focus errors, and while I think I would have been better suited with an SLR, I’d say that I really focused on the music first (pun intended), and only snapped a few here shots here and there when not actively recording.  The camera was lying around in a few different places and not all of the pictures were taken by me, as evidenced by the fact that I’m in some of them.  The main visual component was shot by the film director as a “making-of” documentary, so at some point there will be a video of the recording session floating around the internet.

The pictures are almost current, as the recording session took place just a week and a half ago, and a few days later I was on my way to the Durango Independent Film Festival.