Didn’t quite get that angle right, but then again I was trying not to look into the Sun…

My mom knows me well… 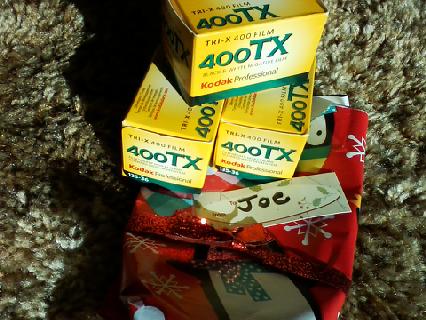 The Super 8mm group on Facebook had a discussion going on about what the best cameras were for beginners, and I put in my 2c. 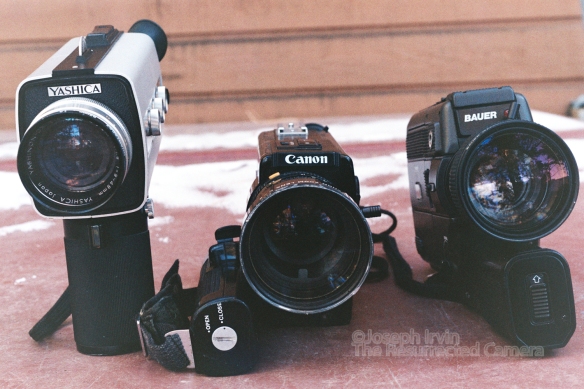 If you are brand new to shooting super 8 or film in general, get a Pentax K-1000 or other manual 35mm still camera. If someone is such a beginner that they don’t know the fundamentals of light and dealing with different shutter speeds and f/-stops, then they should spend a while taking pictures first, take an intro to photography class that shoots on film, something like that. Now once they have some photographic experience, see below:

A beginner shouldn’t be spending a whole lot of money (nor would they want to anyway) so thrift stores/garage sales are the way to go. The most important thing will be if the camera transport works (BTW I’ve heard that running the camera at speeds over 24fps can burn out the motor if there is no film inside), the battery compartment has no acid corrosion, and then whatever mechanical/optical features in which the buyer is interested. If the buyer doesn’t know enough about this to test these functions, than see above.

So forget listing particular cameras. Not only is it taking the easy way out, there will be plenty of cameras left off and it drives the prices up for that model, while others are relatively undiscovered.  Also one shouldn’t get hung up on any one camera, there are so many great models out there that I’m still hearing of for the first time, and I’ve been researching this off/on for the last few years.  Never mind the brand, so I’ll list features one should look for instead, in order of importance:

1. Price and condition. Absolutely most important aspects
2. Uses easy-to-find batteries like AA.  It’s great to have the Wein Cell but annoying having to keep an extra stash of batteries around for the light meter (and makes it verify that everything works)
3. 24fps framerate
4. All other framerates 9-36fps or greater (for slow motion), timelapse, etc.
5. Ability to read all (or at least most) film speeds ASA25-400 (I’d make this #2 but it takes a lot of research; Tri-X, 50D and 200T should be plenty of choice for the beginner)
6. exposure compensation of some sort, even just a backlight button but +/- a stop or two would be nice (1/3 stop increments would be even better, but I don’t know that many super 8 camera had that)

Now, the further down the list one gets, the longer one will actually use that particular camera I think, but what I’m personally looking for in a super 8 camera and the list I’ve given for beginners aren’t necessarily in the same order. That said, there are plenty of cameras out there that have all 6 of these things and more; it’s possible that the “beginner” camera is enough to last the filmmaker a lifetime.

I’m not ever giving up mine!

Another piece of advice: don’t leave your batteries in the camera for an extended period of time!  They can leak acid and corrode a lot of the insides, killing the camera stone dead.  Even if you’re buying it so that can be repaired by a tech, know that most techs won’t touch a camera with battery acid corrosion, or if they do it’ll become much more expensive to fix.  So remember that when you’re looking at a camera, because that will tell you a lot about its condition!  If you’re buying online, this is the most important aspect, and most sellers don’t even bother to look.  In fact, most will say “I don’t know how to test it” (half the time they’re lying and it’s broken), but if they’re willing to verify that the battery compartment is clean and the price is good, then it might be worth the chance.

If you’re willing to put in the effort and do the research to find a camera with the features you personally want, you’ll be rewarded and will end up paying a lot less than someone that just has to have “the best.”  And I’ll tell you something else: there’s no such thing as the best.  I’ll give you the resources that have helped me the most, and good luck.
–The Super 8mm Facebook Community
–The Super 8 Wiki
–Filmkorn’s Super 8 Database

Hey guys, I couldn’t actually reblog this post from Studio C-41, but if you don’t follow them I thought I’d pass this article along.

From what I gather, Tetenal is in financial trouble through no fault of their own, but something to do with their suppliers and larger buyers reneging on orders.  Evidently they’re looking to restructure and cut out the middleman, looking for ways to connect more with home-developers, building up that part of the business.  And they want to know what products they could bring back that consumers would buy, or whatever other ideas people have.

Personally I don’t do home developing and have never used a Tetenal kit, though I hear that the company is very closely linked in making a lot of photochemistry, beyond mere home developing.  I’d certainly like to do my part and if there were some kind of crowdfunding set up, I’d donate to that with no reward.  I know the film community can and will band together to keep things running smoothly here.  #savetetenal

I’ve had a total of two 8mm projects sent off to labs, the first to Pro8mm and the second to Cinelab.  While I was quite happy with the results, I’m shopping around to see just what my options are and just how low I can get on price, mostly based around total cost of shooting one roll of super 8 film.  And what a plethora of choices there are!  I don’t know everything, and there are probably developing labs and scanning houses I don’t know about, but these seem to be the main ones.  All values rounded up to the nearest dollar. Prices for D94 and ECN-2 developing, no E6. Shipping prices not included as they vary, the same with hard drives, but it must be said that those are extra expenses that must be taken into account.  These are all labs and scanning houses located in the continental USA.

(Now #1 thing is that the cheapest place to buy film is directly from Kodak, especially if you’re a student like me because there is a 30% discount, but also because there’s almost always a markup with retail sellers)

There are volume discounts applicable for each place I think, I didn’t take that into consideration as much because I’ve never shot enough for that to matter…yet. Still, I doubt that it’s likely to change the labs’ placement here.  All film processing costs include the prep for telecine.  I consider 2K to be the lowest acceptable resolution, and have also included the maximum resolution available, either 4K or 5K.

Special thanks to the members of the Super 8mm group on Facebook who have chimed in on a few options that slipped by me.  I’m taking most of my information off these companies’ websites where pricing is advertised, though special mention should go to Gamma Ray Digital for taking the initiative and providing me with a PDF of their prices, they are very active on social media and usually respond to questions extremely quickly.  There seems to be an option for everyone with them (and they have a reputation as the best scanning house on the East Coast, if not the country). I’ve put up a few different options but it’s based mostly on what options personally interest me.

Some things of which to take note:
-Cinelab has some pretty good pricing, cutting some especially good deals for students that get the develop & scan package.  However, I know from experience that they are not very communicative and can make mistakes scanning.  I’m also hearing a lot from people that they take a long time to scan the film; a good problem I suppose, meaning that just that many people are shooting it!  A lot of people will have their film developed at Cinelab and sent to Gamma Ray Digital for scanning, as they are both located in Massachusetts about an hour away from each other.  That said, it’s still in the same ballpark price-wise as the package deals I listed.
-The Film Photography Project just recently announced their scanning service and it seems like a crazy good deal: $20 to scan any roll of super 8 film whether in HD, 2K, or 4K (that’s not advertised but I have confirmation from Michael Raso).  I think I’m going to give them a try next time.
-There was a film lab in Denver called Cinemalab, maybe 2 hours away from me but unfortunately it closed down between my first and second projects.  One of Cinemalab’s former employees, Nicholas Coyle, inherited some of their equipment and has built his own scanner from that, and can offer 2K super 8 scans at $15 a roll.  He also pointed out to me that one doesn’t necessarily need to get Spectra’s prep for telecine, so for one roll of film without it, that’s only $17, and that makes it probably the most affordable option, though quality may vary.