My friend Cam had his 40th birthday party at our local Black Bear Distillery, in Green Mountain Falls, being about halfway between our town and Colorado Springs.  I’ve been keeping track of these guys since about the time that they had a website and Facebook page (before they started producing spirit), and though they’ve been open for business and open for tours for a while, the timing was never right to visit myself, until now.  As an aside, most of the people in these pictures go to my church; the owner of the distillery goes to a church just down the street from us. 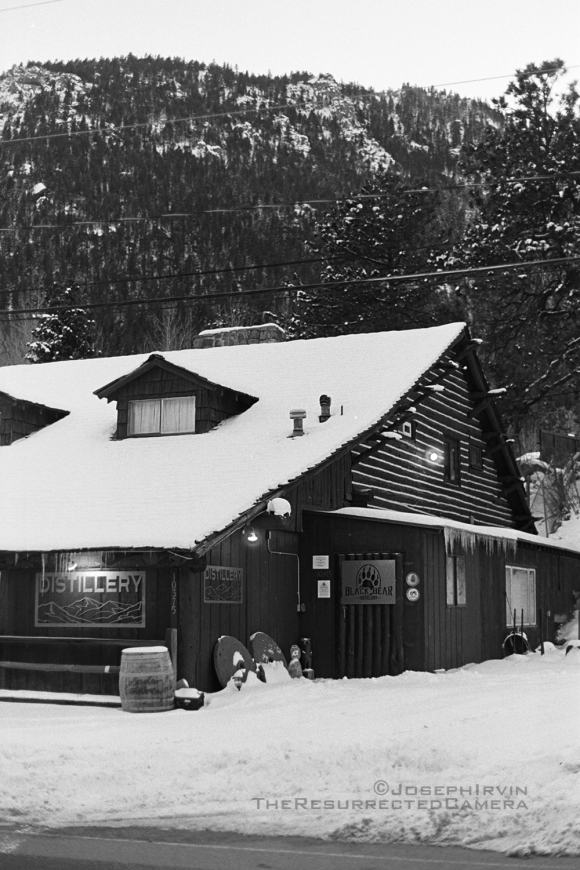 The Black Bear Restaurant dates back to the late ’30s (was called Pike’s Pub & Grill for a long time) and the current owner was operating the restaurant until a few years back, I don’t know exactly why the restaurant closed but I’m happy to have a distillery now.  The manager took us through the history of the building (including ghost stories) as well as giving us the low-down on modern “moonshine,” and why theirs is better/more authentic.  And considering it’s owned by a 4th generation North Carolina moonshiner I’ll take their word for it.  I think the first bottle I ever bought from them was their Craft Shine Reserve (no longer offered) but the only one I would (and have) actively looked for is their Irish-style whiskey.  It has a quite salient corn flavor compared to Irish whiskey, though evidently it’s about 80% barley.  I asked about the possibility of a single malt, and evidently they’ve been trying but they haven’t found a way to age it properly in the Colorado climate.  A Straight Boubon is in the works though!  I’m pretty excited for that.  They get their grain from the Colorado Malting Co. in Alamosa, and do the rest of the process in-house, which is always great to hear.  I remember reading their original plans where they were going to soak the barley in the stream, grind it with two reclaimed millstones run by a pack of donkeys…sadly the residents of GMF weren’t too thrilled about that part of the operation.

I shot a roll of Tri-X pushing two stops but it was pretty dark in there, and I could have benefited from either more light or a faster film.  Not feeling quite confident to push Tri-X to 3200 or beyond I decided to shoot at 1/30 second throughout.  The Yellow 50 made it possible, though at f/1.4 its depth of field isn’t the largest.  I keep thinking about one of the Tomioka f/1.2 lenses except they cost about a grand…that’s a lot of money for an extra half-stop.  Since I’m retaking Advanced Photo I’m developing my own black & white film again, using the Sprint chemistry and I think this is the first time pushing film with Sprint (at 75F as I thought the fewer agitations would keep the grain under control).  I’m pretty happy with the results, though I intend to experiment with pushing Tri-X to 3200 and beyond, probably with Caffenol.

It was confirmed just recently that the photochemical division of Tetenal is now owned by its employees. Situation is status quo, all products will be continued without a hitch.  Read the full story here:

…and in with the reliable.  Just look at that old piece of crap: my mom bought me this officially-branded Chicago Blackhawks duffel bag when I was about ten years old, so I’ve had it more than two-thirds of my life.  It carried my clothes to sleepovers way back when, to film festivals in Colorado, and housesitting jobs as recently as last month; it got a lot of love along the way.  After 20+ years it’s finally getting retired in favor of a BAD Bags #3 duffel/backpack hybrid.

It’s a pretty important investment for me because I’m flying to Ohio towards the end of March and I’m sick of borrowing my mom’s luggage.  I certainly couldn’t take the Blackhawks bag with holes everywhere and no working zipper…

One of the guardians of Black Bear Distillery.

Experimenting with different looks, this is Tri-X pushed 2 stops and developed in Sprint chemistry.

Director Rob Bowen in the school library listening to the music I’m writing for his latest film, The New Millennial Tramp in “Socks.” 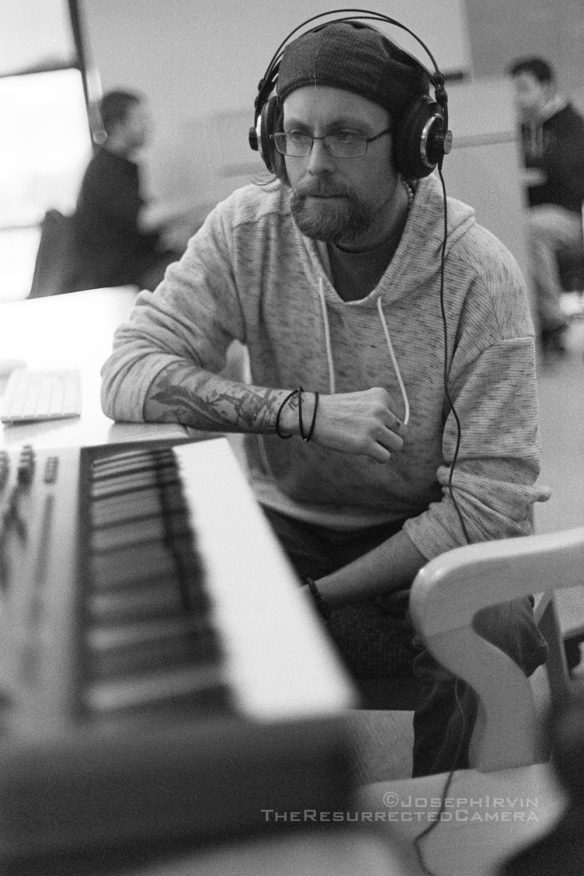