I’ve put off writing this post for a while now, partly because I’m not partial to this camera and partly because the scans were a bit flawed.  This camera was gifted to me by a friend along with a whole lot of Canon FD lenses, most of which were off-brand zooms, but also a pretty nice 35mm f/2.8 wide angle that has gotten a lot of use in the last year, as well as two (!) 50mm f/1.8 lenses (bringing my total up to three).  So, that equipment along with the Canon AE-1 body, 100mm lens and now more zooms than you can shake a browncoat at, I’d say my Canon system is actually pretty far towards completion.

I’m not a fan of the T50 because there isn’t a whole lot of control a photographer can have over it.  It only works in Program mode, which I’m not a huge fan of.  In fact, its one saving grace is that it doesn’t read DX encoding, meaning I have some control over the exposure using the ASA setting (as long as you’re not going outside of ASA25-1600).  In that at least, it has an edge over the Nikon N60.  Using a roll of expired Fujicolor 200 of unknown age that I picked up at a thrift store for 50 cents, I knew I wanted the colors to come out as warm as possible (or at least have the film exposed properly) so I shot this entire roll at ASA25-50.  Sometimes it worked out, sometimes not as much.  (OK, it has more than just Program mode, if you take your lenses off “A” it gives you 1/60, but I didn’t try that too much, as a lot of the roll was taken with the 100mm lens)

One big problem I’m learning with shooting expired film is that even when exposing several stops over box speed, the negative density might be a bit on the thin side.  Talking to my camera store, it seems that’s a pretty big contributing factor in causing scanning lines.  Without my own scanner and a more personalized scan and attention to detail, I think it’s just going to be something I’ll have to live with.  This day, my mom asked me if I wanted to go take pictures of fall leaves with all her peeper friends so I came along, but I made her take her Minolta XG-A and a roll of Ektar.  That roll was pretty fresh and didn’t suffer from any scanning lines.

With all the complaining out of the way, I’ll say that those Canon FD lenses are quite wonderful, nice-looking and very sharp.  The only reason that I don’t use them more often is because I prefer the character of the Pentax Takumar lenses, even with the eccentricities of using the screw-mount system (Canon lenses look much more neutral to me).  I knew I’d end up getting some pretty nice images, and scanning lines aside, I did.  I’ll rescan this roll myself once I have that capability, but for now, I was stuck in Photoshop using the Healing Brush whenever I had the time and got pretty tired of trying to fix the problems.  Here are a few that I’ve got done and I think turned out pretty nicely.

Here’s an example before Photoshop: 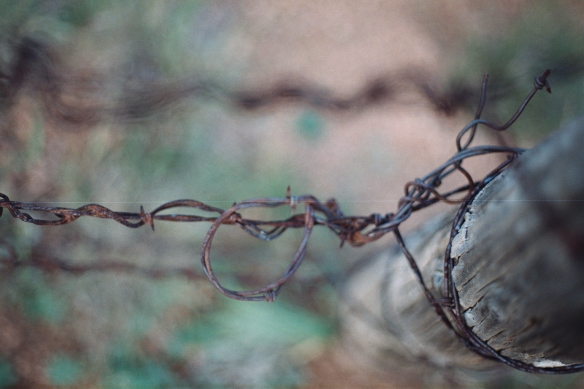 I don’t think I talk enough about how nice and how sharp those FD lenses are, but I’d say they do very well indeed.  One of these days I’d like to run a roll or two of Cinestill 50D through my AE-1 and see how that looks, but the T50 I got tired of dealing with and to use up the roll fast I took pictures of several of my other cameras.  Strangely enough, there are no scanning lines on those shots.  Hmmm…