Back in 2009 I picked up a few of my grandfather’s cameras from his house, right before I moved out to Colorado.  I finally got around to shooting a roll in June when I was staying at a vacation rental in Fountain for a few months (I wrote about that here and here; this could be considered Old Cars, Pt.II).

The top-of-the-line model of 828 film cameras back in the late ’30s, I’ve always liked the look and feel of this camera.  It’s sleek and compact, with things that snap into place at the press of the button or just a flick of the thumb.  Everything about this camera cries “Quality!” with every ounce of its rather hefty weight.  This was one of three cameras I brought from my grandparents’ house when I left Ohio in 2009 and whereas the Kalimar A was a camera that I used out of necessity, this was the one I really wanted to use.  The trouble being that it took 828 film which is fucking expensive.  I bought a roll ages ago from B&H Photo because they’re nice enough to roll some Tri-X down to 828 size but it costs $20 (now $24) and you’re only getting 8 exposures.  127 film is looking pretty good now, at only $13 per roll.  I did find this which has inspired me to at least try to load some 35mm film to give this a shot. 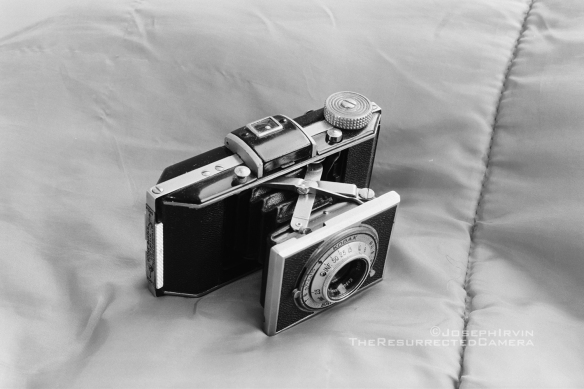 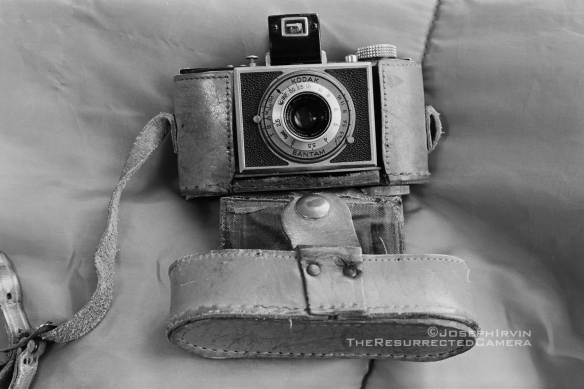 Back in the day Kodak had an annoying history of introducing proprietary film formats for use with Kodak cameras ensuring that they could only be used with Kodak film.  Then when the film stopped selling well Kodak would discontinue the film size rendering these cameras, if not completely useless, then very expensive.  And this was a camera that cost the equivalent of $500 in 2021 dollars.  While I might champion their cause today, Big Yellow did have some rather questionable practices back in their heyday.

The roll of 828 film only gives you 8 exposures, with quite a lot of space in between; I have no idea why.  But here are a few of the cars and Jeeps that Regan my landlord has lying around his property waiting for restoration: 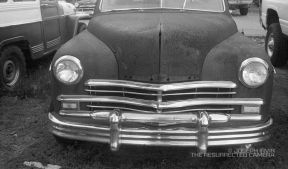 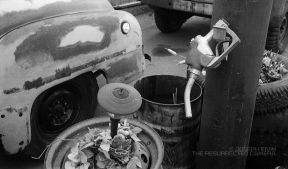 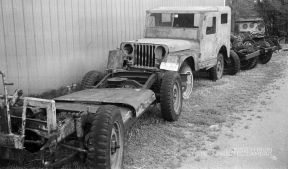 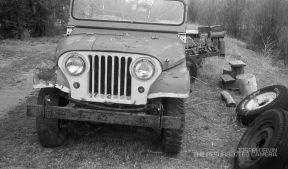 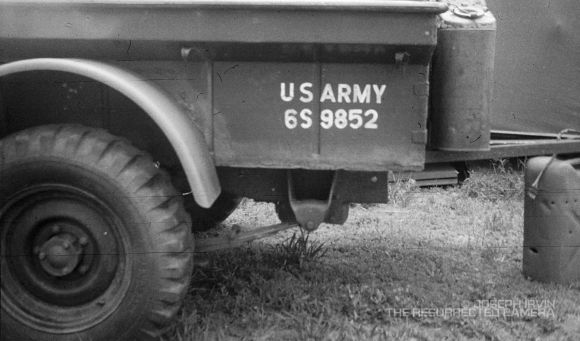 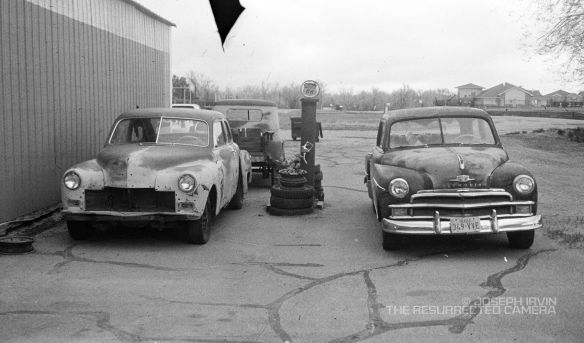 It has a better composition than its duplicate, but the rudimentary flip-up sights don’t really lend themselves to precise framing.  This film was spooled using 35mm film and unfortunately several of the perforations were torn; this one in particular was a very large flap that hung over the film and blocked the light from the top of the frame.  There was enough film left for me to get a bit more in: 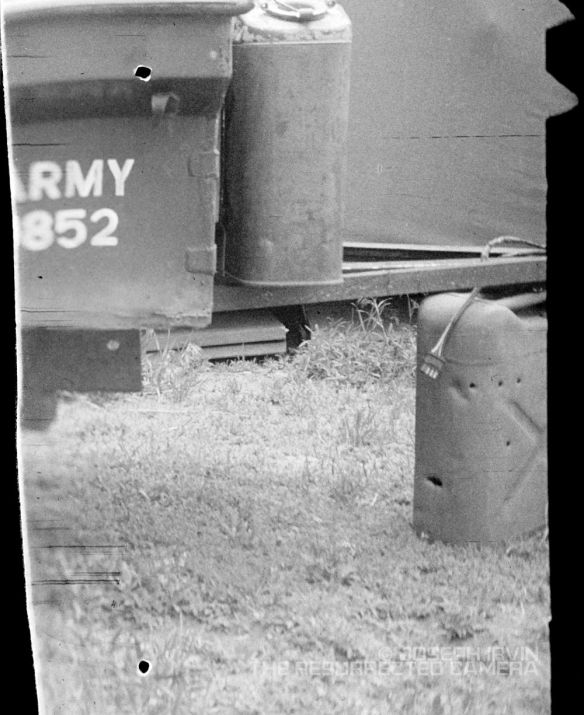 I haven’t seen it for years, but my grandpa kept a war diary all the way through World War II where he served under General Patton.  From what I remember the pictures he pasted inside were small and square so I don’t think they were taken with this camera, but it is of the right vintage and I wonder if I’ve seen everything.  It’s a credit to the manufacturing standards in Depression-era America that this 80-year-old camera still functions as it should when its last servicing was before the birth of my parents (see header pic).  I wouldn’t vouch strongly for the accuracy of its fast shutter speeds, but besides that I can’t complain.  I can imagine some pretty good things might have come along in the 1960s if Kodak and others had tried to compete with Germany and Japan in the manufacture of fine cameras.  Instead we got shit like the Instamatic.

Now the actual size of the pictures is larger than a standard frame from 35mm film, and went into the sprocket holes on each side, but my Pakon scanner can’t deal with that, so I worked with what I had and ended up with images that were 1.7:1 (cropped very slightly on the sides) as opposed to 1.5:1. I had to use TLX Client Demo to alter the frame width and then recropped using Affinity Photo.  This flexibility is one of the great advantages of the Pakon over other scanners, and makes it if not easy, at least workable to scan frames that are a non-standard size like this, or panoramic, etc.  I’m glad I have this camera that belonged to Grandpa, it’s a family heirloom to me, though the camera is a bit more dated than those I usually shoot.  It has all the handling of other medium format cameras of that era but with the disadvantage of a smaller frame size, plus the film is very expensive.  At $24 (now) per roll and only 8 frames, you’re looking at $3 per image, so you’d better really make them count.  I didn’t, I just wanted to use that roll up so I could put the camera back into storage for the rest of its life.  I’ll probably never use this camera again.

According to my dad, aunts, and uncle, my grandpa (father’s side) was a pretty good photographer.  I haven’t seen too many of the pictures he took, certainly by the time I knew him he wasn’t actively shooting much, if at all.  One of my aunts worked part-time as a wedding photographer for a long time, my dad was fond of photography for a while, and certainly the photo bug resurfaced in me!  Just a few weeks before moving to Colorado I had been over to their old house and found some of his old cameras, which I took with me when I moved: 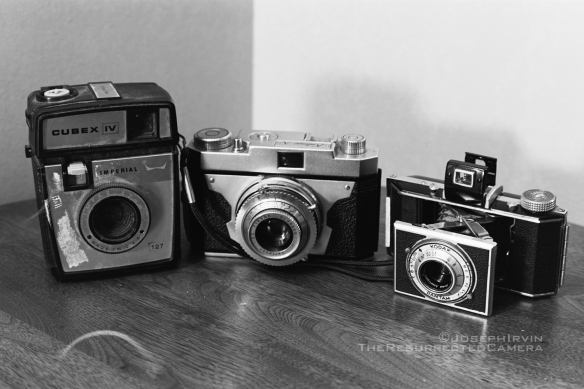 Only one of those took 35mm film so it was the one I used way back when I was a wee baby photographer.  The other two take rollfilm that’s not readily available (it all has to be cut down from 120 medium format) so I’ve never used them, though I did buy a few rolls for them years ago.  As this is my last semester with access to a darkroom I’m making it my mission to shoot those rolls and develop them by June.

When I went back one last time in April 2019 I happened across two more, and it would seem the cream of the crop, as far as features go: an Argus C3 and a Kodak Retina IIIc.  The Retina will require some work to be functional but the Argus works well enough, a tough little camera.  So along with the two rollfilm cameras I’ll at least put a roll of 35mm through the Argus and Kalimar, for old times’ sake.