I bought the Yashica Electro 8 LD-6 because I wanted something that I wouldn’t worry about loaning out to budding would-be filmmakers.  Yashica super 8 cameras are not as well-known but supposedly their lenses are great–I’ll put that to the test myself in the next month or two. 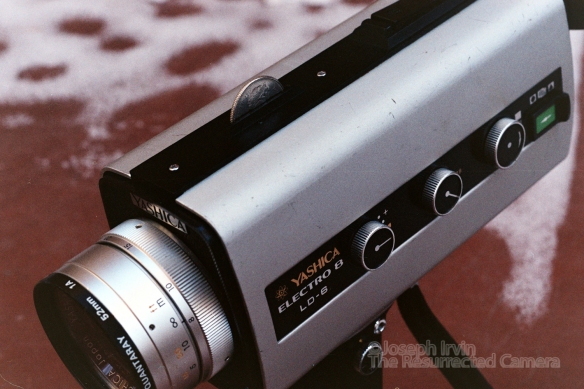 The camera might look a little basic at first glance, but as far as I can tell it has all the essential features, which means that even though I’m not necessarily a beginner anymore this camera will see use with me.  Cameras of this sort have one glaring weakness, though: the filter key!  1965-2008 the vast majority of small format film was tungsten-balanced, and camera manufacturers assumed that the unwashed masses using super 8 would not know to use a Wratten 85B filter when shooting outdoors, even though they were installed inside every super 8 camera.  So, in an attempt to make the consumer-grade cameras as idiot-proof as possible, they made the 85 filter automatically engage unless one was using a movie light or had a filter key to insert into the slot on top of the camera.  Such a small detachable part is easily lost and when buying a camera online one should take care to get one with this filter key.  If not you might be in a pickle as I was…until I found references to the coin trick.

If you insert a dime or quarter into the filter key slot, it will disengage the 85 filter!  What they don’t tell you and that I had to learn for myself is that you don’t insert the coin, you slam it in, push hard!  There’s a lot of resistance, and I was afraid that I would break something, but it just needed that extra bit of elbow grease.  Also the dime is finicky, and takes some wiggling around sometimes to get the correct position, though it is more compact (also harder to get out).

What better use for a Canadian quarter? Queen Elizabeth can oversee my filmmaking endeavors.

The camera has its downsides too.  No exposure information like f/stop is projected through the viewfinder, so what benefit can be gained from the exposure compensation dial is dubious.  While it has a single frame option, there’s no intervalometer.  The lens’ widest angle is 8mm; the top-of-the-line LD-8 widens that out to 7.5mm, but there are plenty cameras that go much wider.  The handle doesn’t fold up so it’s not as compact as it could be, also its metal construction makes it heavy to hold in the hand.  You can see I’m nitpicking now, right?  It’s a robust camera, has a great set of features, and can on occasion be found pretty cheap.  I paid $15 shipped for mine, not gonna complain about that.